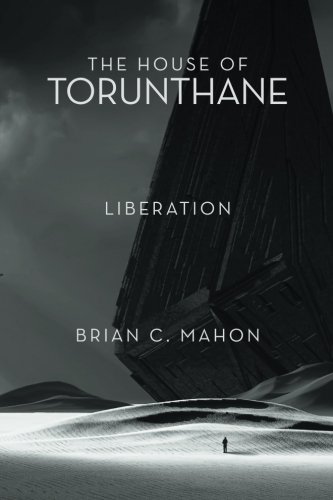 I will say this about The House of Torunthane – I wanted to write a book that I would be comfortable letting my children read when they were a little older.   I had no intention of writing something lurid, morbid, or grossly obscene.  I started writing it while under the influence of The Lord of the Rings trilogy, which I think captured battles of epic proportions without indulging in violence.  Somehow, I wanted to capture the history of Menver, steeped in magic and an upbringing of sword and shield, with the world of Ajax, brought up among starships and machinery.  My hope is that I find an audience who wants to read more, know more, because there is much unwritten: Vedin’s adventures as his fallen clan’s leader, the first visitation of the Jortash to Earth, and the brothers’ exile to Fordin.  Plus, Menver has been bound to Tuluhr too long, and the events unfolded in Liberation have laid the groundwork for conflicts and the maneuvering of great powers that the self-proclaimed Archmage could never have foreseen.

The House of Torunthane: Liberation

“On an alien world, an egotistical, magic-wielding immortal fights to protect his only living relative while trying to find a means to free the planet from an invading army.

Brought to the planet Tuluhr against his will a long time ago–along with his brother, Vedin–Menver Torunthane now cares only for his nephew, Ajax, a devout warrior of the planet’s defenders. Vedin was a hero to all, except for his son, and Menver, taking the boy under his wing, teaches him the magic that is his heritage. Recently the pair have assisted the Deltornir, the Tuluhrai army, in attempting to fend off an invasion from the Shekethrum, people of a nearby planet. Now on their own, the mage and the warrior are searching for a way to keep themselves safe–and to permanently free the planet from its invaders.

Maneuvering through waves of alien invaders, predators, and even the manipulations of those they fight with, Menver Torunthane will do whatever it takes to protect his nephew and secure their freedom.”P

Order From the Author

Below you’ll see a few links where you can find The House of Torunthane online.  However, I have in stock over one-hundred copies to be sold a much lower price since the only employee is me. Price includes shipping (USPS Media Mail only).
Hard cover: $26.95
Soft cover: $16.99