What to Do With One’s Best Friend

Note: This story was originally inspired by my dog, Gunner, who developed a type of oral cancer that developed into a tumor which loosened his teeth, made his tongue swell, and otherwise ruined his health. Unlike this story, we had no supreme technology to beat it. Wished we did, but I can’t regret knowing his suffering is over. Included, a picture of him from his better years. 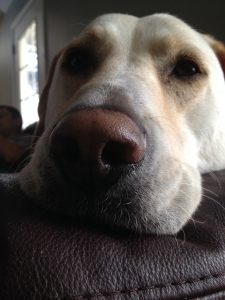 “What to Do With One’s Best Friend”

Microfiber pores puff lavender plumes as I flop into the chaise lounge’s cozy arms. I love the scent of lavender. It is such a good idea that she scents her furniture.

“So, where would you like to start?” Amy asks, clicking her pen. According to her office door, she is Dr. Amy Hegel, PhD, but she was fine with Amy.

“Truth be told,” I begin, “Nothing is the same. I know sometimes that’s for the best, but for me, and Jarred I guess, it isn’t. I mean, I’m glad we did it, don’t get me wrong. We just weren’t ready for the changes.”

“Some changes take us away from where we are comfortable, and it’s natural to be bothered more by changes that are forced on you. Can you tell me more about what happened between you two?”

“Well, his disease was so abrupt and so… well, it was all we could think about. Taking care of him became our life. We thought maybe he ate something in the backyard, a dead animal, a plant, something rotten. At first his drooling didn’t stop. Then his face got bigger. Then we found a tumor growing under his teeth, like pushing them out of his gums, and the poor guy couldn’t keep his tongue in his mouth anymore. He got really lethargic. You could see how miserable he was, but he was still the same, still our dog.”

Amy mm-hmm’s toward the corner.

“So, I mean we called the vet, y’know, one of the corporately sponsored ones with the proprietary nano-medicines. We weren’t going to just pretend some outdated chemical treatment would be at all as effective as nanos. I mean, if we’re paying thousands on treatment, why not go nano, right?”

“As soon as treatment started, like by the second day, the swelling went down, his gums were a healthy pink again, and he could keep his tongue back in his mouth. But just as he got healthy, he started behaving differently. We thought it was a side effect of the new nano-blend we signed for or maybe the emotional shock of being that sick. I mean being that sick, close to death? That’s just as mentally scarring to dogs as for people. We’re all mammals after all.”

“I agree. Studies have shown anim- other mammals are just as emotional as humans. What happened after that?”

“Probably, oh, last month? Sometime last month, how much he changed really sank in. Bowie refused to sit on the couch with me. Even when I offered him treats or put his doggie bed next to me. What really did it was when Doggid Bowie looked me in the eye and said,

‘It’s over, Katlyn. These conditions are disgraceful. For one, it’s insufferable that I only relieve myself when you allow it, and, two, didn’t you consider just once, Kat, that maybe feeding me the same processed food for every meal might have led to my condition? Did you think that was healthy? You nearly sent me to the grave!’ Something like that. I think that’s pretty word for word.”

“That must have been quite a surprise for you.”

“Surprising and hurtful! He used such a hurtful tone! I didn’t know what to say, so I called him a bad dog and kenneled him for the rest of the night. All night long he kept yelling about ‘misguided homocentric ideologies’ and how ‘lack of common communication is not tantamount to inferiority’. His words, not mine.”

“Wow. It sounds like he made you really upset.”

“He did. I went to bed early that night just to get away from him. Jarred was still at work. The next morning I told Jarred I’d take Bowie to a corporate shelter because they knew how to handle bad nanos, and, like, his constant comparing of people to other primates was really getting to my self-esteem.”

“That’s understandable. There are both constructive and deconstructive ways to share how we feel, and the way we choose our words and tone can determine how our feedback and our perspective is perceived,” Amy quietly says to the corner.

“Yeah, I just had it, y’know, and I think Bowie heard me talking with Jarred. Bowie was so quiet in the car, and we were halfway there when I realized, like, he is still my dog, y’know? So, I turned into the first parking lot I could, and we talked through things, agreed to a few things. He sits in my lap in the evenings now when Jarred’s at work, and I make sure there’s a third plate at the dinner table. He pees in the tub whenever he needs as long as he rinses it down, and I think that’s fair.”

“Has the change in dynamics between you two been helpful for your relationship?”

“It’s been okay so far, but he tenses up every time I touch his fur.” I look over my shoulder and back to Amy, mumbling, “It’s not the same.”

“Thank you for sharing, Katlyn. Mr. Bowie, how do you feel?”

Doggid Bowie complained during the whole car ride here of speciesism. I see him on the corner cushion roll his eyes and mutter, “Woof.”

“Is that really what you want to say?” Amy asks, tapping her pen against her clipboard.

“I want her to take it back!” He huffs, sitting up.

“Take what back, Mr. Bowie?” Amy looks at me, like I know what he means.

“Tell her that caring about my quality of life does not make me a villain!”

“Katlyn? Do you understand why he’s upset?”

I do. I knew it when I kenneled him that one night, the way he walked in with his tail between his legs. “I’m sorry, Bowie. I didn’t mean it. You are my good boy, forever and ever.”

His nose raises to the air with a huff, but his tail sweep says it’s what he wanted all along.

“On Time and Intent”

“Message from the Fleet”